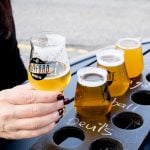 Clifford Brewing Company is a gem of a Hamilton brewery producing award-winning craft beers since 2015. Located in the east end of Hamilton you can find them just off of Nash Road.

Brad Clifford, the brewmaster at Clifford Brewing Company, hit the craft beer scene in Hamilton in 2009 as a homebrewer and quickly became a contender in Hamilton Ontario’s competitive craft beer scene. Winning awards as a homebrewer propelled him into contract brewing with the dreams of sharing his craft brews with the rest of Ontario and beyond.

There are some laws and regulations in Ontario like everywhere when it comes to the commercial distribution of alcohol so the next logical step for Brad was to move from home-brewing to a more formal production facility. A small industrial complex on Nash Rd. has been the home of Clifford Brewing since 2018.

Housed in a 10,000 square foot production facility this local craft brewery not only houses all the production but also boasts a large sitting area with lots of tables all socially-distanced as well as a stage for live bands. One of the bands that you may be lucky enough to catch is Bryce Clifford and Brother Superior, a country band based out of Austin, Texas. Bryce is Brad’s brother.

If you prefer the good outdoors to enjoy your craft brew Clifford has that as well. A huge patio that spills into the parking lot with lots of seating and space. Order your beer at the counter when you check-in and take your pint or flight to your seat.

The choice of craft brews at this local brewery does not disappoint and the small group I visited with would agree. A wide choice of lagers is something I don’t see lately as the market seems to be saturated with sours as of late. I prefer a good lager and love that they have three to choose from… a rare find these days.

One of the more interesting lagers is their Devil’s Punch Bowl Lager aptly named after one of Hamilton’s most famous landmarks. This lager is an India Session Ale (ISA) offering a blast of citrusy flavour found in a citrus IPA with the smoothness of a medium-bodied lager.

Clifford has a range of beers to excite any craft beer aficionado. The multi-award-winning Clifford porter with notes of coffee and chocolate turned out to be my absolute favourite. Porters are my second favourite type of beer outside of lagers and this one struck the perfect balance between chocolate and coffee.

They also offer a Bourbon Barrel Aged Porter where just like the name says it is a porter that been aged in bourbon barrels to give it a slightly bitter chocolate profile with notes of vanilla.

Now for the sours. The most interesting sour I have seen and tasted to date is their Fruition Sour Coconut, Pineapple & Lime. I am not usually a sour fan but am slowly coming around. While visiting I had the opportunity to enjoy the Fruition Blood Orange & Guava Sour. It was absolutely delicious and quite possibly the best sour I have ever had. They don’t have any more cans at the time right now so head on enjoy what is left of the kegs. This sour is brewed every winter and as soon as it is ready I will certainly be picking up a bunch!

Sours are brewed seasonally using fresh fruit so be sure to stop in to see what is available throughout the year.

Rounding out the roster are India Pale Ales and American Pale Ales. It seems that no matter what your favourite type of beer is Clifford has you covered with an array of offerings for any palette. This makes grabbing a tasting flight even more fun!

There is no wonder this Hamilton brewery was named 2019 Canadian Brewery of the Year.

Clifford is an absolute gem and must visit stop next time you are touring around Hamilton or just looking to grab a beer. Lots of seating, a great selection, nice patio while the weather holds out and absolutely incredible flavour.