Made with gluten-free cornbread, fresh herbs, and a handful of other ingredients, this Gluten-Free Cornbread Stuffing is the perfect addition to your holiday table! It’s savoury, comforting and oh-so-good! (Not to mention easy!)

Today’s recipe is one I’m extra excited to share with you because it was made at the request of a reader! I recently shared my homemade gluten-free cornbread recipe and they wanted to know if it would be possible to turn that into a stuffing. The answer is…yes!

While cornbread stuffing is more of an American thing, I was happy to take on the challenge of creating this gluten-free cornbread dressing. The end result was so tasty that I can foresee this on my own holiday table in the near future.

Using cornbread in stuffing versus regular bread adds an extra level of flavour and changes the texture just a bit, which I really love. Even those who aren’t gluten-free will love this cornbread stuffing and it’s an easy dish to pull together if you want to ensure you have something that everyone can eat.

Even better, you can easily make this in advance and simply reheat, so there’s one less thing you have to prepare and assemble before your holiday meal.

How to Make Gluten-Free Cornbread Stuffing

Start by preheating your oven to 325º F.

In a large non-stick pan over medium-high heat, sautee the onion and celery in olive oil. Stir frequently until the onions start to become translucent, about 3 minutes or so. Add in the garlic, salt, pepper, herbs and wine. Mix well.

Allow it all to simmer in the pan until most of the wine is absorbed. If you are worried about serving a dish made with wine to children, don’t be. When the wine cooks the alcohol content will evaporate away.

Next, add the cubed and dried gluten-free cornbread and herb mixture to a large bowl. Use a wooden spoon or spatula to mix.

Whisk the eggs in a separate bowl. Add ¼ cup of melted butter and the chicken stock. Mix well to combine.

Pour half of the egg mixture into the large bowl with the gluten-free stuffing mix and mix well. Do so gently though so as not to break up the bread cubes too much or you will end up with a pile of mush.

Wait one minute then add in the other half of the liquid mixture. Gently mix and let it all rest for about 2 minutes. This rest time will give the cornbread a chance to absorb some of the liquid. Then give it another light mix.

Spread the cornbread mix evenly along the bottom of the pan. Gently press down with your hand or the back of a spoon. Not too hard your you will end up with a brick but a little bit of pressure helps to seal it all together so that it doesn’t fall apart either.

Cover the baking dish with foil and bake for 40 minutes. Remove the foil and increase the temperature to 425º F. Bake for another 15 to 20 minutes so that the cornbread stuffing dries out a little and gets a nice golden crust on the top.

Remove from the oven and sprinkle with the remaining ¼ cup of melted butter. Season with salt and pepper if desired and serve hot.

Some would say to add the butter during the last step of baking after the foil has been removed. I personally like to add it after so that the last dusting of salt and pepper has something to stick to.

What is the difference between stuffing and dressing?

Stuffing and dressing are often used interchangeably (depending on where you live) when talking about the popular holiday casserole. Technically, stuffing is stuffed inside a turkey and dressing is usually made on the stovetop or in the oven as a casserole.

In the Southern States, dressing is almost always called stuffing.

So based on this, I’ve called it “stuffing” simply because it is more often used to describe this side dish than “dressing”.

How to Dry Out Cornbread for Stuffing

There are two methods to drying out cornbread for your stuffing. For both methods, starty by making your favourite gluten-free cornbread recipe, either homemade or from a box, and let it come to room temperature.

The first method is to cube the cornbread and simply let it sit on a baking sheet overnight. This is what I typically do.

Bake it. Preheat your oven to 300º F and place the cornbread cubes on a large baking sheet. Bake for 20 minutes, until the cornbread is dried out but not brown. Turn halfway through baking so that all sides of the bread have a chance to dry out.

This recipe I’ve shared is fairly traditional but if you want to try something new, feel free to add in an extra ingredient or two. Here are some easy add-ins to switch up the flavour and texture. Just be sure to double-check the package of each ingredient to ensure it’s gluten-free.

This gluten-free cornbread stuffing is a traditional holiday casserole, often found on the table at Thanksgiving, Christmas, and even Easter. The rich, comforting flavours and texture pair well with turkey, ham, and all of the other holiday fixings.

You can also enjoy it year-round as a side dish to turkey or chicken (a great way to dress up a rotisserie chicken dinner!), or even turn it into the main dish by adding in crumbled sausage and an extra vegetable or two.

How to Store, Reheat, and Freeze

If you want to make your cornbread stuffing in advance, you can easily do so. Bake as directed but remove it from the oven before cooking the final 20 minutes without the foil. Allow it to cool completely with the foil on, then transfer to the fridge or freezer. If you’re placing it in the freezer, swap the aluminum foil for plastic wrap and a fresh layer of foil.

Before reheating, allow the stuffing to thaw overnight in the fridge. Then pop it back in the oven to reheat and crisp up.

Leftover gluten-free stuffing can be stored in the fridge for up to 3 days. Reheat in the oven or in the microwave.

Can non-gluten-free cornbread be used? What about regular bread?

Yes to both! Regular cornbread can easily be swapped out in this recipe. If using regular bread, bakery bread cut into cubes will work better than sliced bread which is fairly thin.

No matter what bread you use, it needs to be dried completely for this recipe. 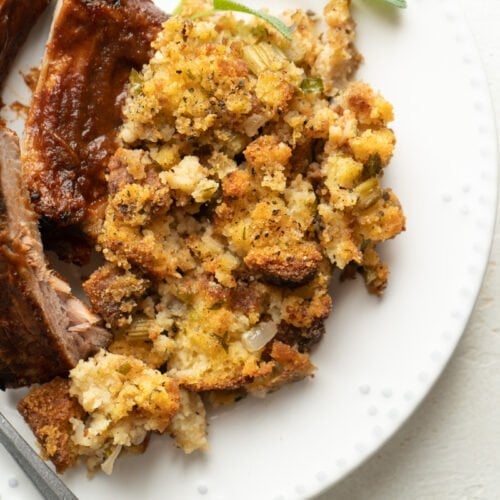 Storage:  Leftover gluten-free stuffing can be stored in the fridge for up to 3 days. Reheat in the oven or in the microwave.

If You Like This Recipe You May Also Enjoy… 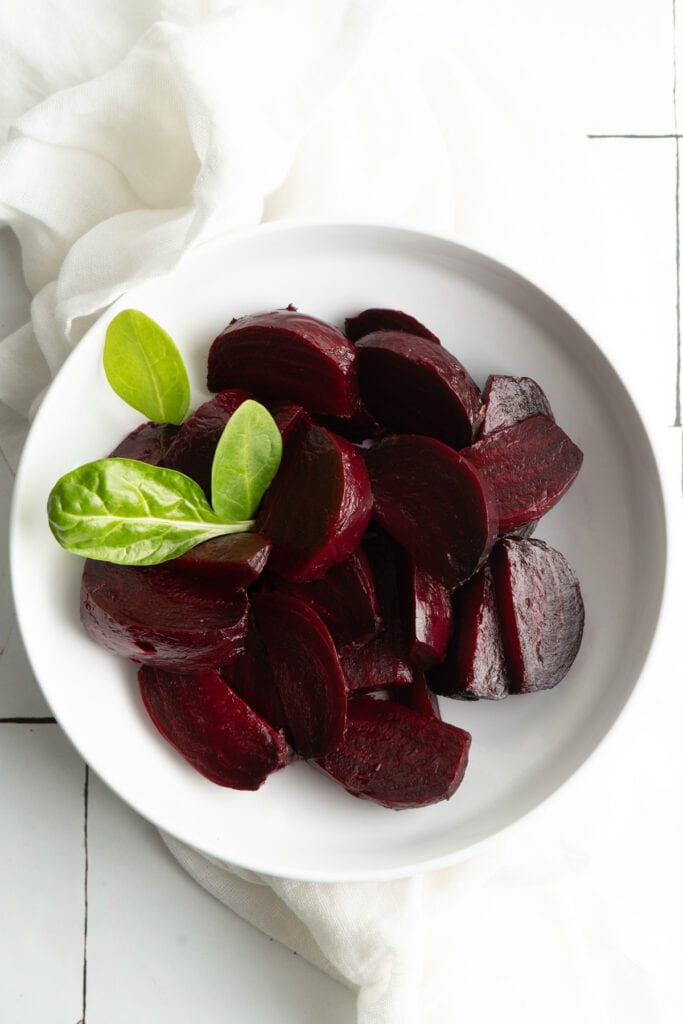 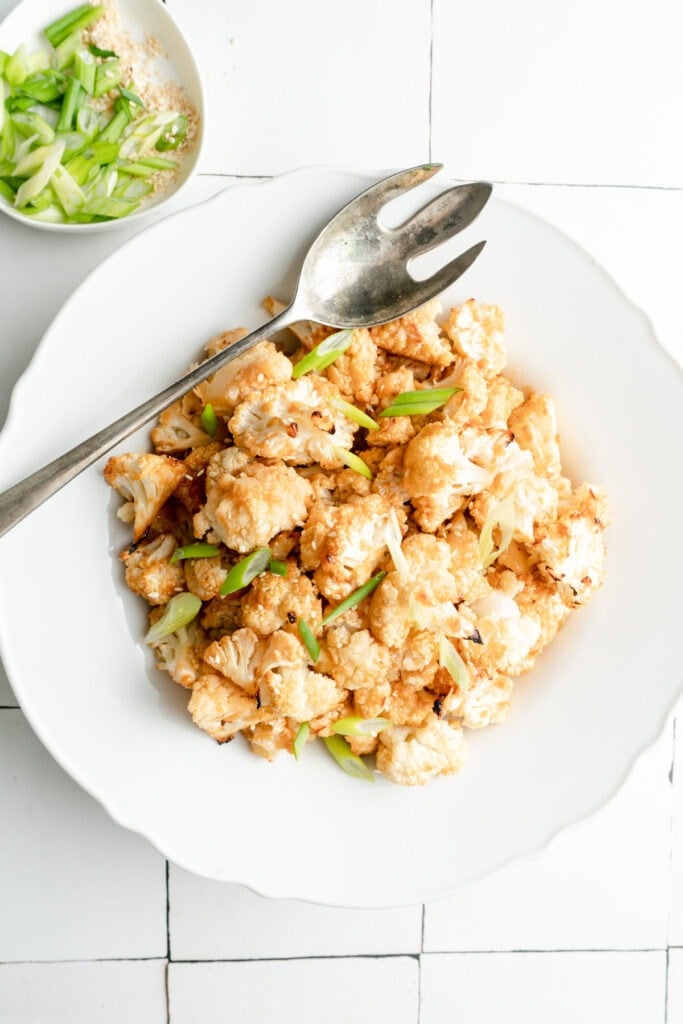 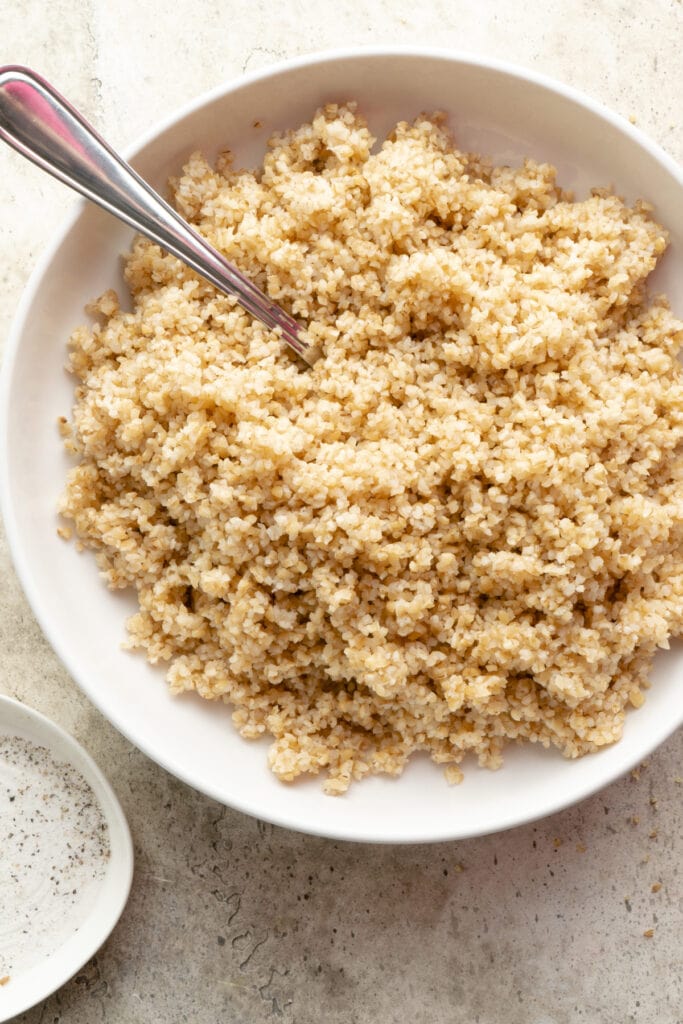 For the step-by-step version of this recipe, check out the How To Make Gluten-Free Cornbread Stuffing Story. 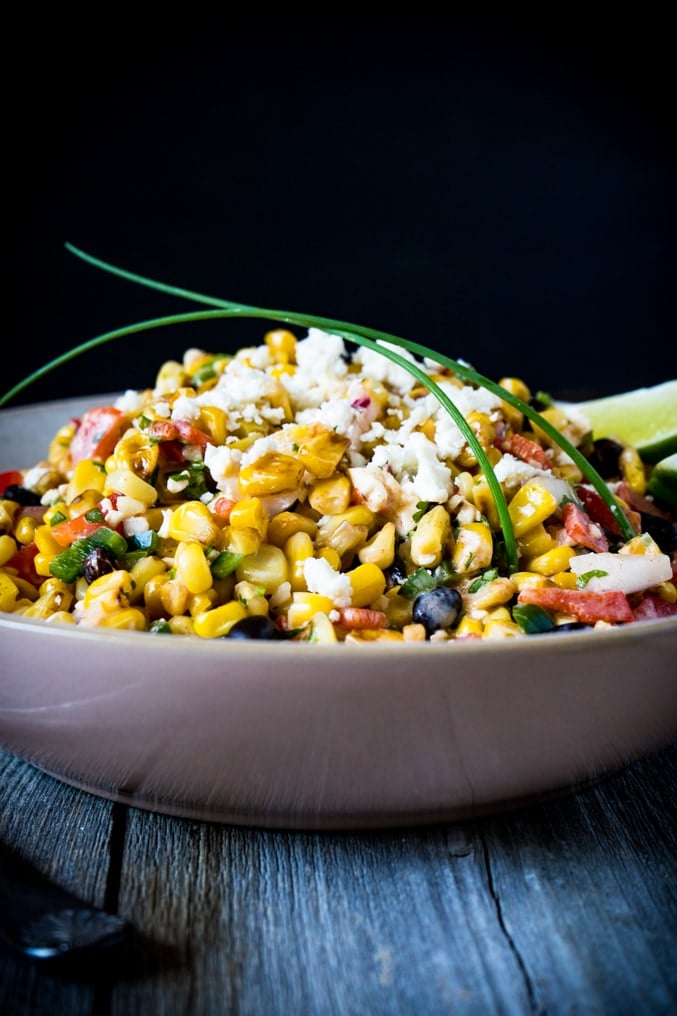 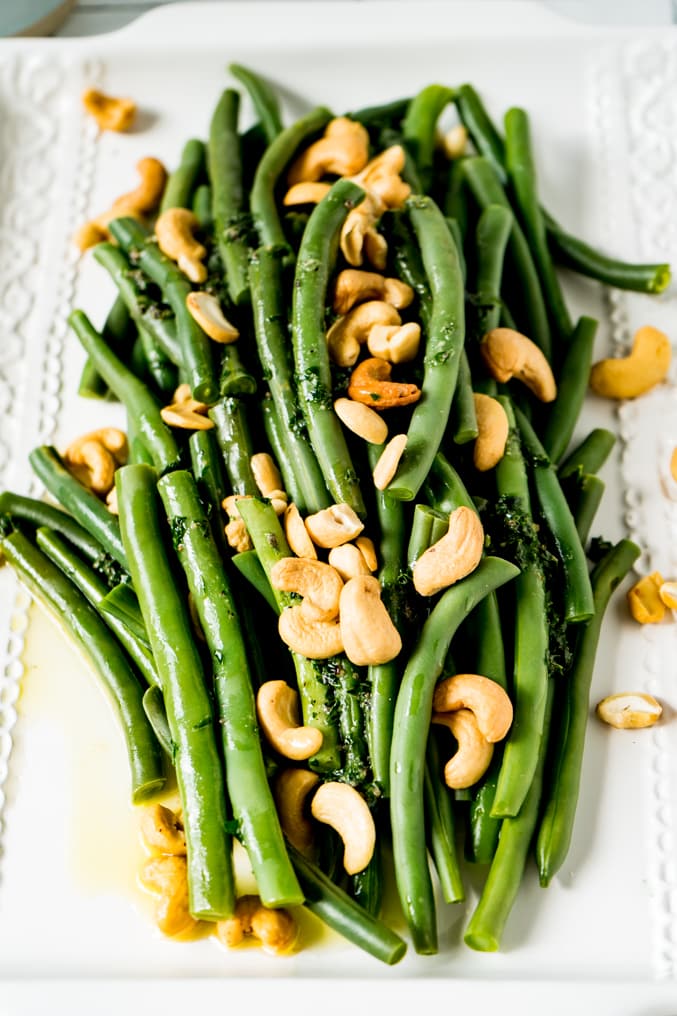 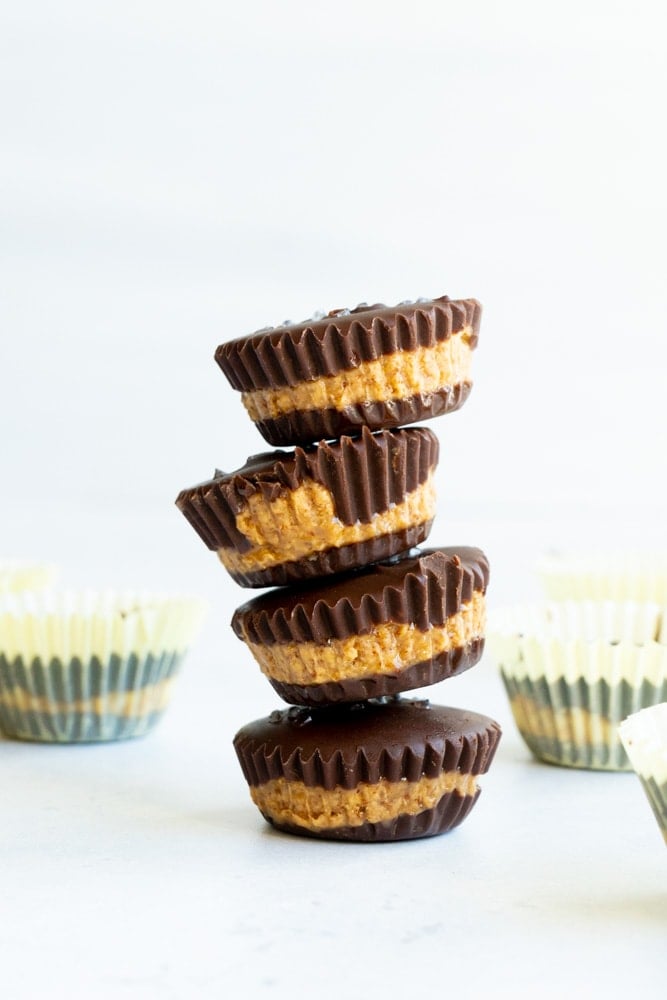 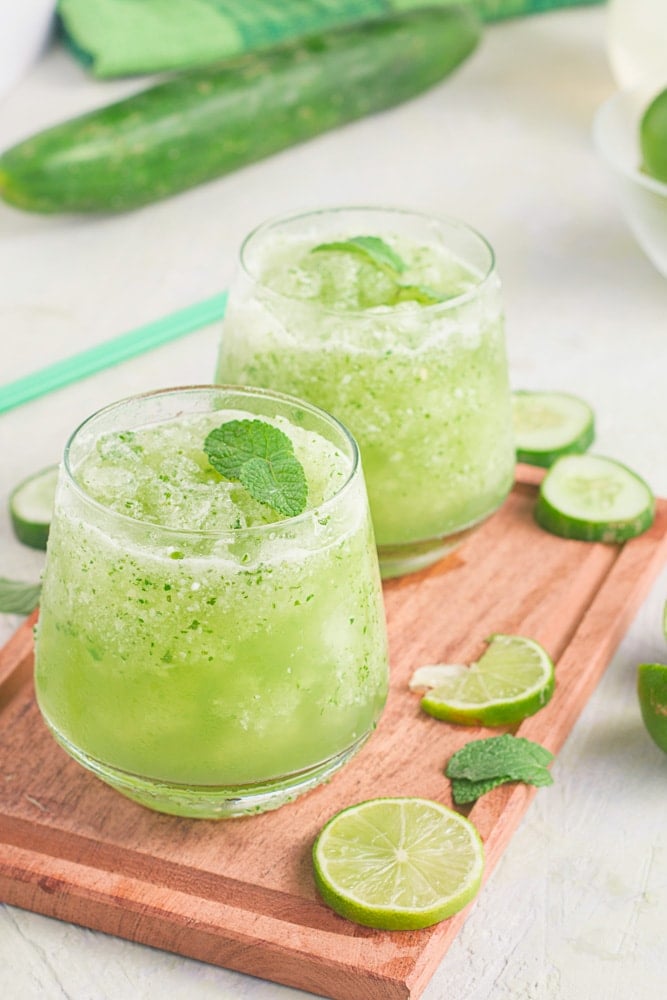 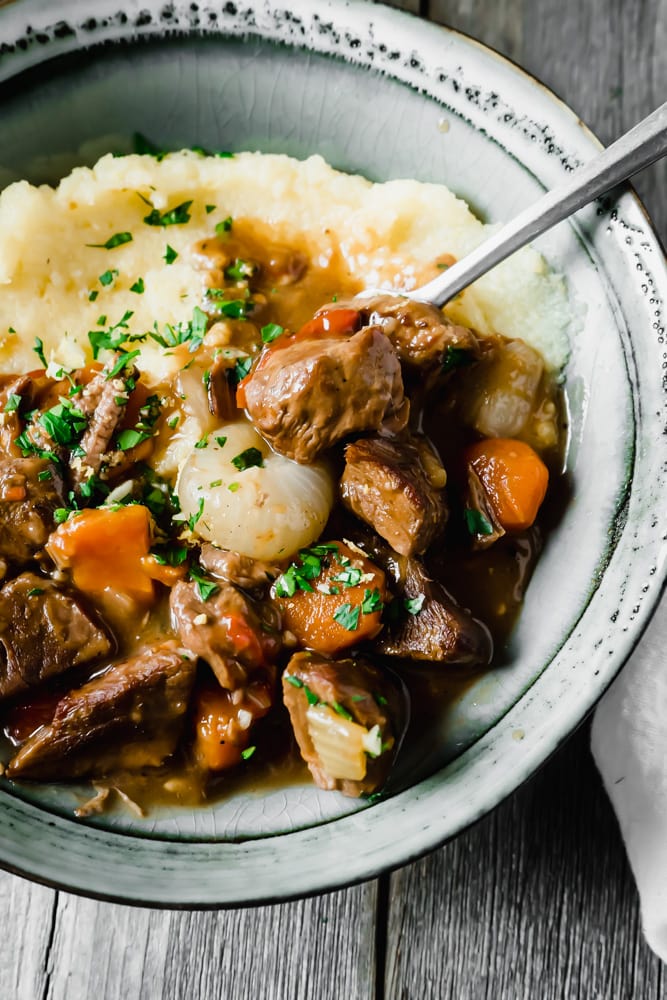