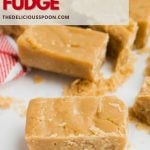 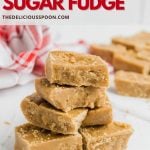 An easy old-fashioned fudge recipe made with brown sugar, cream, and butter along with a hint of vanilla. A delicious confectionary that is creamy, sweet, and melts in your mouth!

My grandma used to make this recipe all the time and would serve it to me with tea and there wasn’t a Christmas that went by where we didn’t have a whole tin on the counter or on the dessert table. The more I get in the kitchen and think of all the recipes I want to share with you the ones that I hold dearest are my grandma’s recipes.

She was an amazing baker. Cooking in my family not so much. But baked goods … my grandma was a master! This fudge recipe is the one recipe though I could not find and my son after hearing me talk so much about this fudge asked me to make him some. Since then I have been on a mission and I am happy to say … I found the recipe!

Tucked away with some notes in a cookbook my mom gave me from the 1930s. Called The Purity Cookbook.

Here are some other amazing recipes of my grandma’s

How to make brown sugar fudge

In a medium-sized pot add brown sugar, granulated sugar, salt, cream, and unsalted butter. Stir with a wooden spoon until sugar and butter are melted and combined.

Stop stirring and only stir occasionally from here to keep the sugar from burning on the bottom. Continue cooking the mixture until it starts to boil and bubble and reaches a temperature of 236º F using a candy thermometer.

Or to test if the fudge is done cooking you can use the soft ball test. This is really what I use and how I was taught. It may not be 100% accurate so I also always test with the thermometer.

what is the soft Ball Test in Candy making?

So to do this, get a glass and fill it halfway with cold water. Then using the wooden spoon pour a little of the candy mixture into the water. Using your hand see how the candy feels after it has been cooled in the water. It should not feel mossy and like it is going to fall apart. If it does continue cooking until the sugar when cooled in the cold water becomes a soft, stable ball.

If it becomes hard and/or stringy you have overcooked it and there is no fixing that so test often!

Let the candy mixture cool until the bottom of the pan is cool enough to touch or the mixture is about 110ºF. Once cooled add the vanilla and using a wooden spoon quickly beat until the candy mixture losses its gloss and becomes a smooth matte finish.

You need to summon your inner beast here and use your muscles to work hard and fast. As soon as you start to stir the candy will start to crystalize and become lighter in colour and harder to stir so move fast. Think of it as a mini-workout before eating a pound of sugar!

Then quickly pour the brown sugar fudge into an 8″ X 8″ glass baking dish lined with parchment paper. Using the back of the wooden spoon or a spatula smooth the top of the fudge out and push it into the corners of the pan.

Let cool completely on the counter for about an hour and then slice into squares using a sharp knife.

Why do you need to use a wooden Spoon?

Because my mother said so. Actually, she did but there is a reason unlike many of the other nos I got in my teenage years.

There are actually two reasons.

The first, so you don’t burn your hands while stirring. The candy mixture gets really really hot and a metal spoon is a good conductor of heat. The metal spoon will heat up quickly and be too hot to handle. Wood does not store heat as well so it will not get hot enough to burn you while stirring.

The second reason, metal spoons will induce crystalization. There is a whole scientific thing about this that I don’t understand but Chef Harold McGee in his book Food and Cooking explains that using a metal spoon attracts the heat away from the sugars inducing crystalization.

I don’t really know but in the end… just use the wooden spoon.

Is brown sugar fudge the same as penuche fudge?

I would say yes. Penuche fudge is said to have originated in New England and is made with brown sugar, milk and vanilla but in the south, it is considered similar to a praline without the nuts and is called brown sugar fudge. Both have a maple-like flavour because of the concentrated brown sugar flavour.

The name Penuche originates from the Italian word Panucci which refers to a similar recipe of a fudge made with no chocolate and brown sugar.

How to store brown sugar or penuche fudge?

Fudge does not need to be refrigerated and will last up to 2-3 weeks stored in an air-tight container on the counter. But this will never be a problem trust me… fudge has a tendency to disappear quickly. 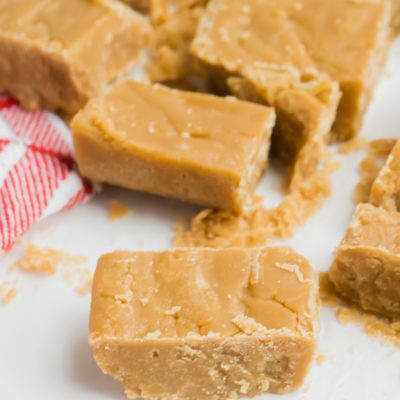 Can be stored on the counter for up to 3 weeks in a tightly sealed container. Substitutions: Heavy whipping cream can be substituted for evaporated milk Add-ons: Pecans or walnuts can be added at the same time vanilla is added. A 1/4 cup will do.

If you like this recipe you may also enjoy… 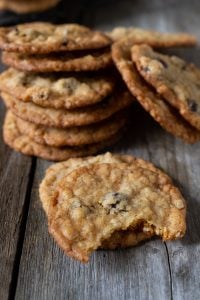 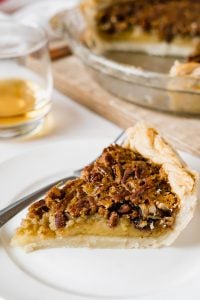 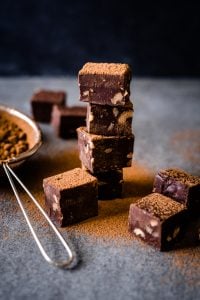