A healthy gluten free apple crisp recipe that tastes anything but healthy!  Sweet apples with a crunchy oat and almond flour topping. There is no better dessert in the winter to enjoy than warm apple crisp with a scoop of vanilla ice cream or dollop of vanilla greek yogurt.  Delish! 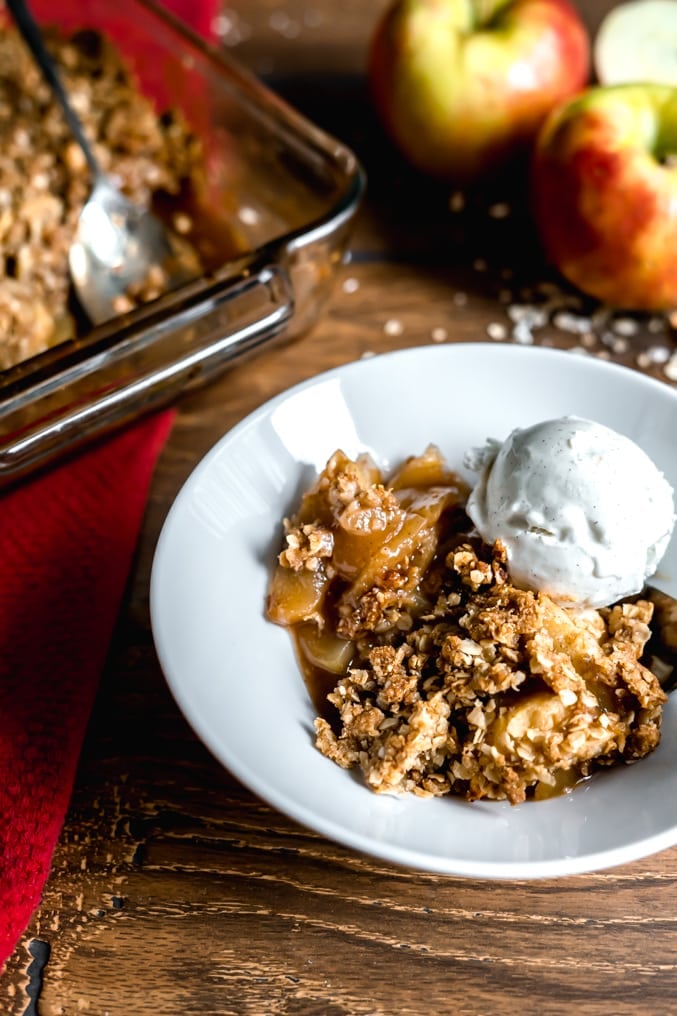 I grew up eating apple crisp as a kid for every holiday dinner. The sweet smell of apples in the oven while we ate reminded me that I had to leave enough room for dessert. My mom’s recipe is delicious but loaded with sugar. In fact, the entire top layer was a layer of brown sugar and butter. No oats. Just butter and sugar. She is now a diabetic… not because she ate too much of her apple crisp but a pre-disposition from earlier in life. So time to find a new delicious apple crisp recipe.

I am always on a mission to try and reduce the sugar in creative ways or find ways to improve the ingredients in my favourite recipes. Swapping them out for something more wholesome. Dessert is dessert though let’s face it. No dessert is 100% good for you. It is meant to be enjoyed as a treat so a little sugar or sweetness is expected.

Some other Great healthy apple recipes to try! 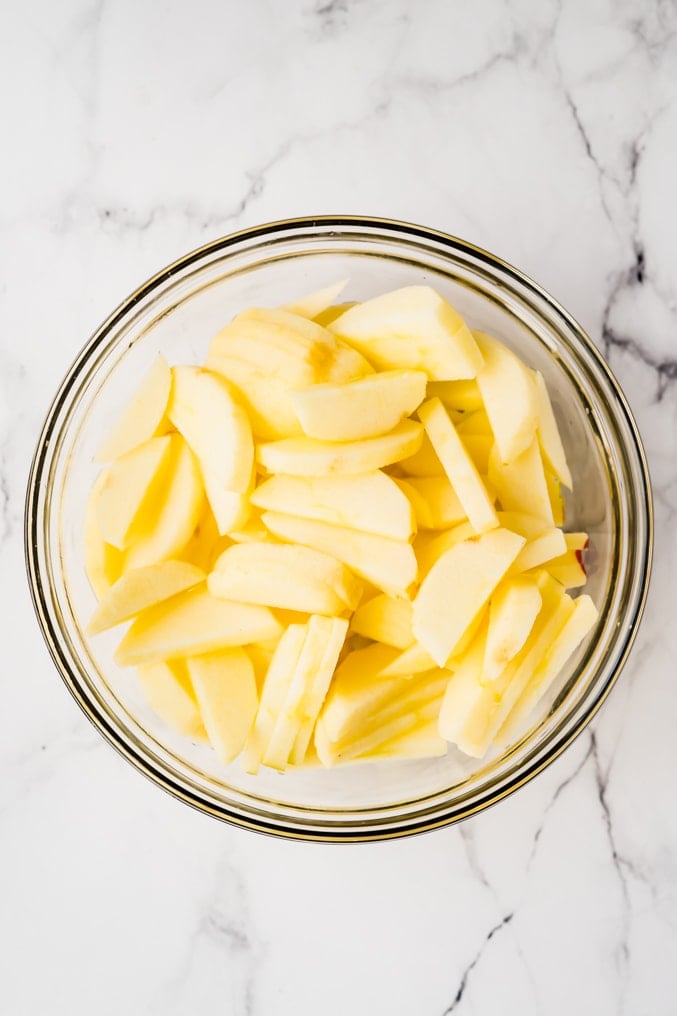 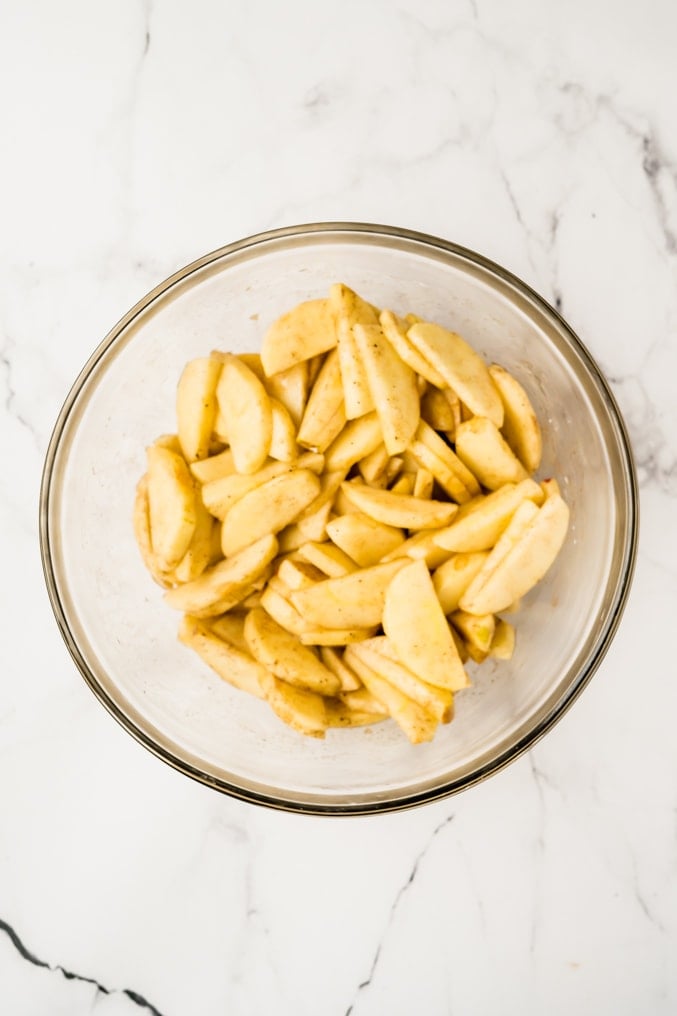 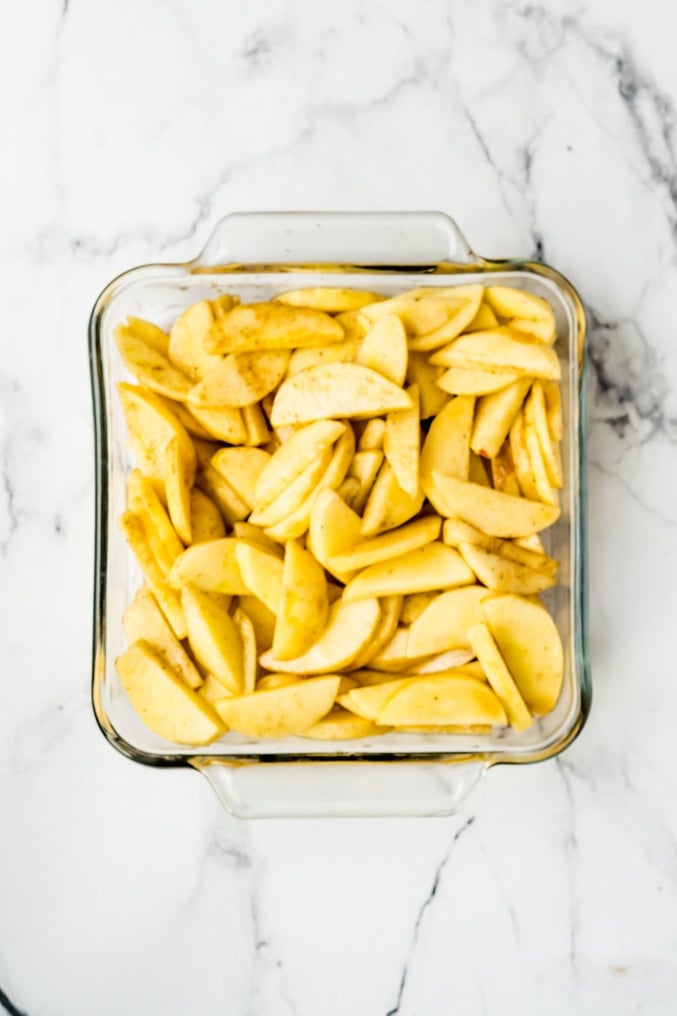 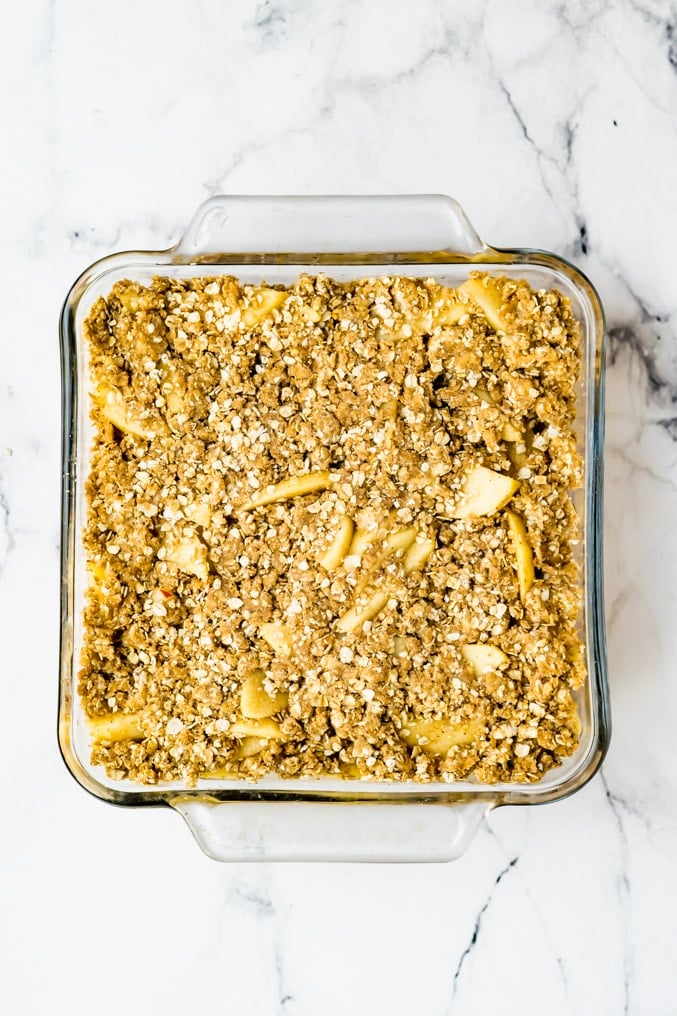 In a medium bowl add rolled oats, almond flour, brown sugar, butter, cinnamon and salt. Mix with fork until combined breaking up butter so that an course oatmeal like texture forms. Pour into baking dish over apples and gently pat down to evenly cover the top. Bake for 45 minutes. Remove from oven and let stand for 10 minutes before digging in.

Which apples are best for making apple crisp?

When baking apples it is always best to go with a crisp, tart apple that will stand up to the heat when baked without turning mushy. Honey Crisp, Granny Smith apples work the best but you could also go with Royal Gala apples that stand up well but are even a little bit sweeter. Check out this article all about the best apples to use for cooking and baking for All Recipes.

dOES aPPLE cRISP NEED TO BE REFRIGERATED?

I personally do put my leftover apple crisp in the fridge though there are rarely leftovers. You can cover with plastic wrap once completely cooled and store on the counter for a day but that won’t stop the crisp from becoming less crispy. Time and simple air will soften the crust so I see no benefit to leaving it on the counter. I always err on the side of caution and would recommend covering and putting any leftovers in the fridge.

Can you freeze apple crisp?

Yes, you can freeze apple crisp after it has been baked. Once it has been completely baked allow it to cool fully and then cover tightly with aluminum foil. I double wrap the dish fully so that no air can get in and cause freezer burn. Apple crisp can be frozen up to 3 months. When ready to eat let it completely thaw in the fridge overnight and then pop it in the oven at 350ºF until it is fully heated through the centre.  About 25-30 minutes.  This will also allow the crumble on top to get crispy again.

If you made this recipe and enjoyed it please leave a comment or a 5-star rating. 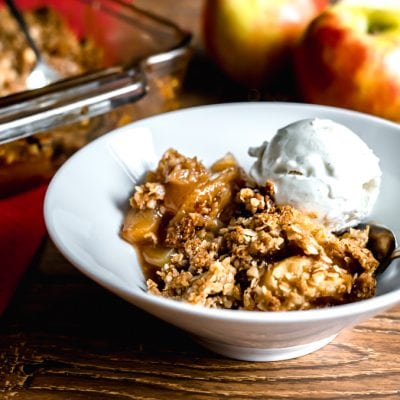 A healthy gluten free apple crisp recipe that tastes anything but healthy!  Sweet apples with a crunchy oat and almond flour topping. There is no better dessert in the winter to enjoy than apple crisp warmed with a little scoop of vanilla ice cream or vanilla greek yogurt.  Delish!

if you enjoyed this recipe you may also like… 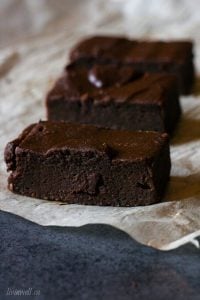 Welcome to The Delicious Spoon!

Hi I’m Alisa!  Food Blogger, wife and mom of two who loves to share great healthy recipes and a few sweet treats that taste as good as they look!

Because food is meant to be delicious!