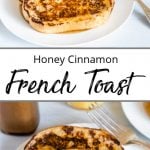 This easy Honey Cinnamon French Toast Recipe is made special with a bright and lively sweet Honey Cinnamon Sauce.  The sauce can be poured over the warm french toast or used as a dip for French Toast Fingers. Either way, it is the perfect recipe for a weekend breakfast or special brunch with family and friends.

French Toast was never something I ate as a child simply because my family was a meat and potatoes, eggs and bacon kind of family.  Maybe if I was lucky pancakes out of a box! It wasn’t until I was out with friends for breakfast that French Toast was even known to me.  I, of course, was not going to risk ordering but my friend who did encourage me to give just one bite a try.

The skies parted and the angels sang… French toast tastes like heaven!

Even better… it sounds fancy but is super easy to make!  It’s now my absolute favourite breakfast for when I want something a little fancier and decadent.  For some of my other favourite breakfasts check out the Breakfast Gallery for more recipes to try!

What Are The Ingredients For Honey Cinnamon French Toast?

To make this recipe all you need is thick slices of bread, heavy cream, milk, eggs, cinnamon, BeeMaid creamed or liquid honey, lemon juice, unsalted butter, vanilla and a pinch of salt.

What Kind of Bread Works Best For French Toast?

You will want to use a thicker heavier type bread so that the bread when dipped in the batter does not fall apart.  French bread, brioche or challah bread work the best. Cut the bread in 1” slices.

Do You Need To Use Heavy Cream To Make French Toast?

No.  Any milk will do. No need to run out to the store.  Whole milk or heavy cream and skim or 1% milk combo work best to give your french toast a creamy custard-like texture.

Why Is Your French Toast Soggy?

There are a couple of reasons your french toast may be turning out soggy or undercooked in the centre.

Tip:  If your cinnamon french toast is not cooking well through the centre you can also try putting a lid over the top of the pan so that the internal temperature of the pan increases.  This way you won’t risk scorching the bottom of the bread that is on the pan because you opted to turn the heat up.

What Are the Best Toppings For French Toast?

How To Make Flavoured Creamed Honey?

Creamed honey has a creamy velvety rich taste on its own but if you are looking for something just a little bit different try flavouring creamed honey with cinnamon, lemon or vanilla.

I am very happy to be working with BeeMaid Honey on this post to celebrate National Honey Month for a number of reasons which includes recipe tasting… I mean testing some delicious honey recipes like these Honey Garlic Cauliflower Bites.  But I am also proud to collaborate with them because they are 100% Canadian.  I am a Cannuck for those readers who haven’t noticed my Canadian spelling of words like favourite and colour.

All BeeMaid Honey is made by 100% Canadian bees and their over 300 Western Canadian Beekeepers who are committed to providing the finest honey in every bottle. And they have been standing by the tradition of quality Canadian honey since 1954.  That is a lot of honey!

The sunny and long summers in western Canada provide the clover, alfalfa and canola crops for bees to forage and produce the mild, white Canadian honey prized for its taste.

The average honey yield per hive in Canada is twice the world’s average due to our long and warm summer days and a vast supply of nectar-producing crops.

The Honey Cinnamon Sauce adds a light and lively topping for this easy french toast recipe.  The perfect combination of sweetness with a hint of cinnamon spice brightened up with a dash of zesty lemon undertones.  The French Toast Recipe is easy to make and combined with the Honey Cinnamon Sauce you better be prepared for this recipe to become a family favourite worthy of being passed down for generations!

If you like this recipe please take the time to leave a review and leave a rating.. 5-stars is always awesome! 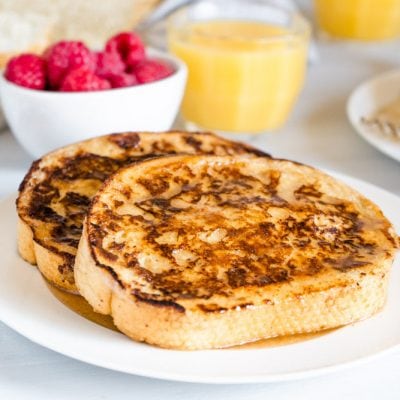 Since this sauce uses a good dose of butter if it cools too much or is stored in the fridge it may become difficult to pour.  If this happens simply sit in a bath of warm water and it will warm up enough to pour again.     Every stove is different so if you find that the inside of the toast is not cooking well enough you can also place a lid over the top of the pan. Doing so will raise the temperature inside the pan a bit without the need to turn up the heat and risk scorching the bread.

Pin this recipe for later! 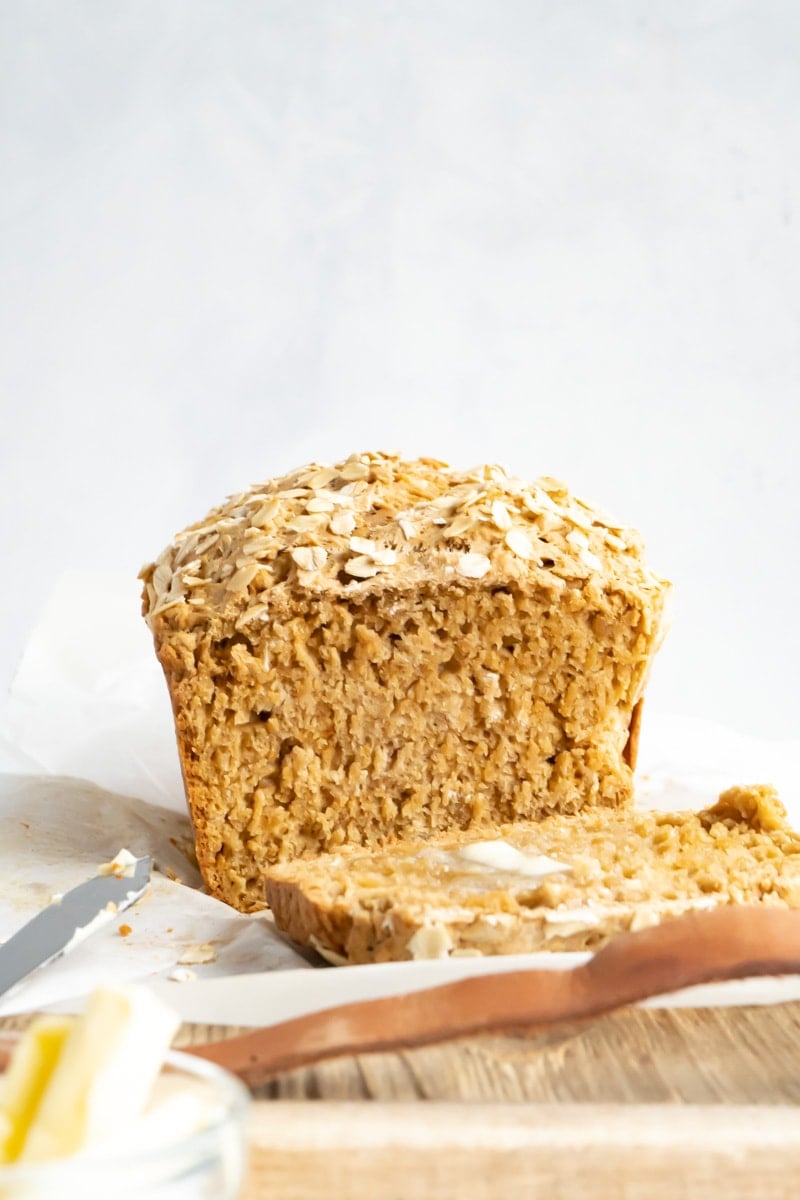 This Guinness Beer Bread is a quick and easy no yeast bread. Enjoy with butter,… 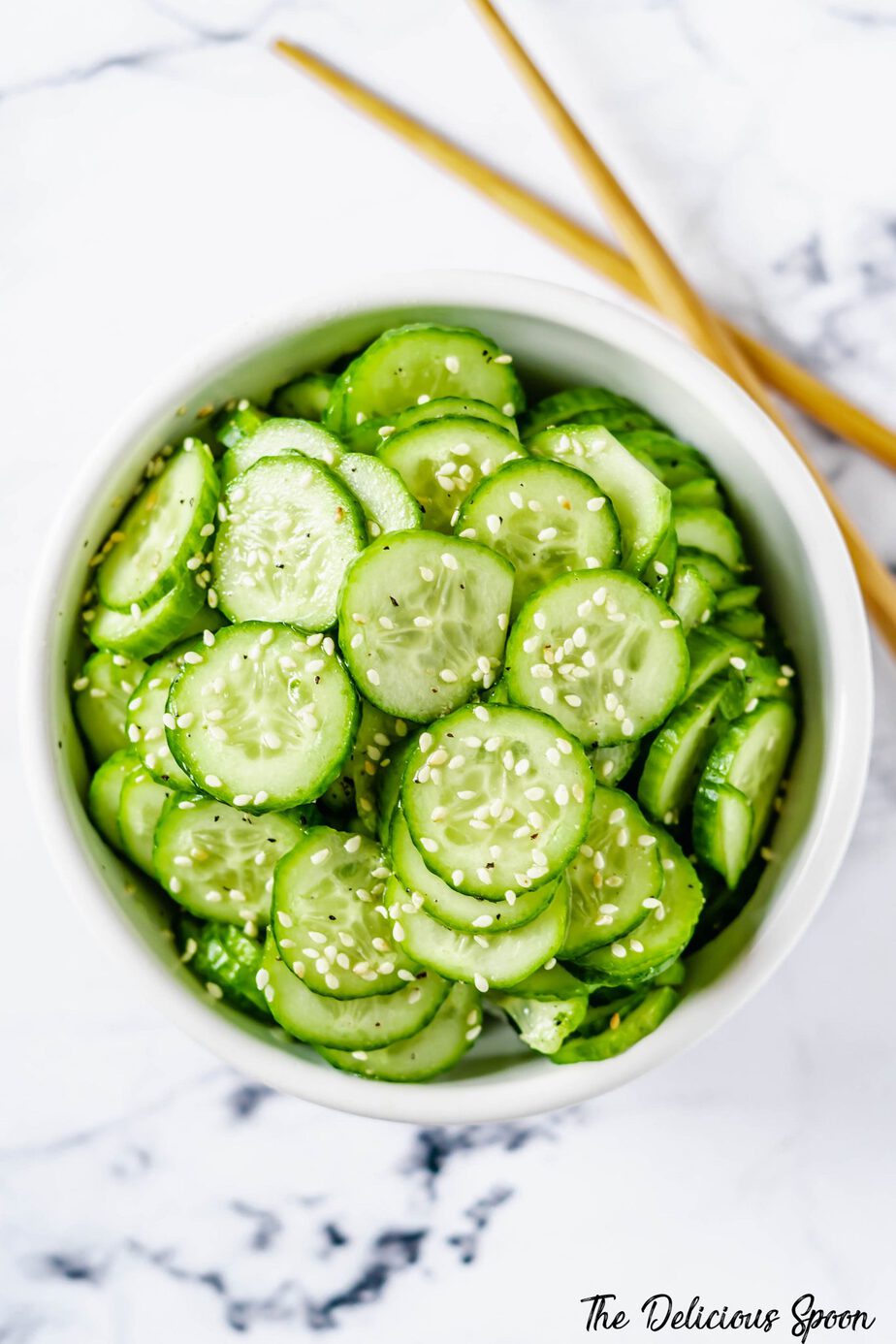 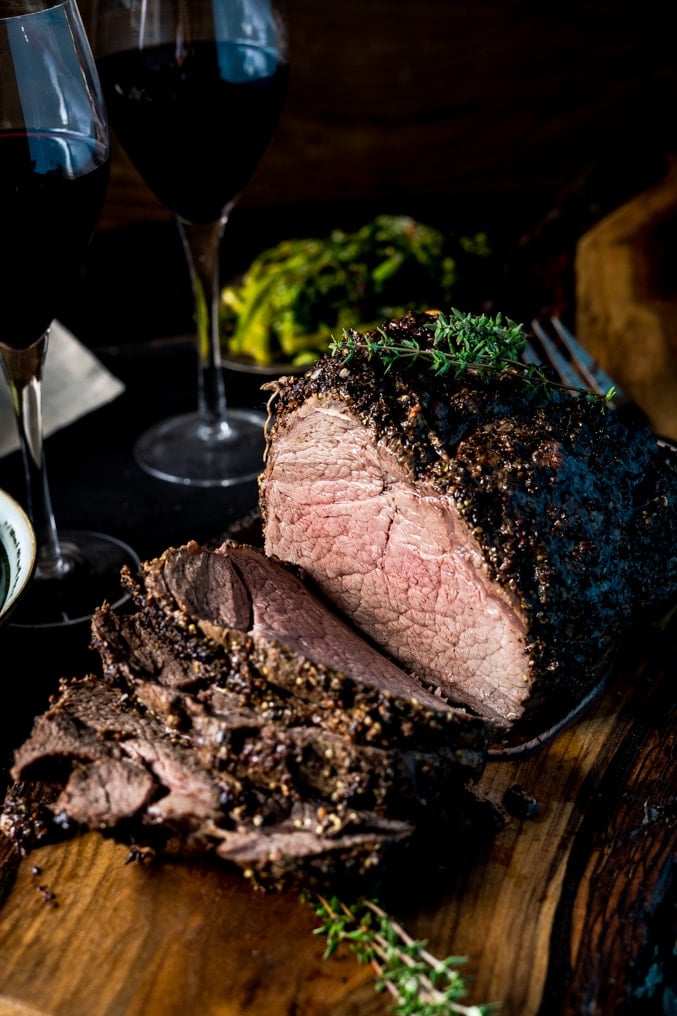 This shop has been compensated by Collective Bias, Inc. and its advertiser.  All opinions are… 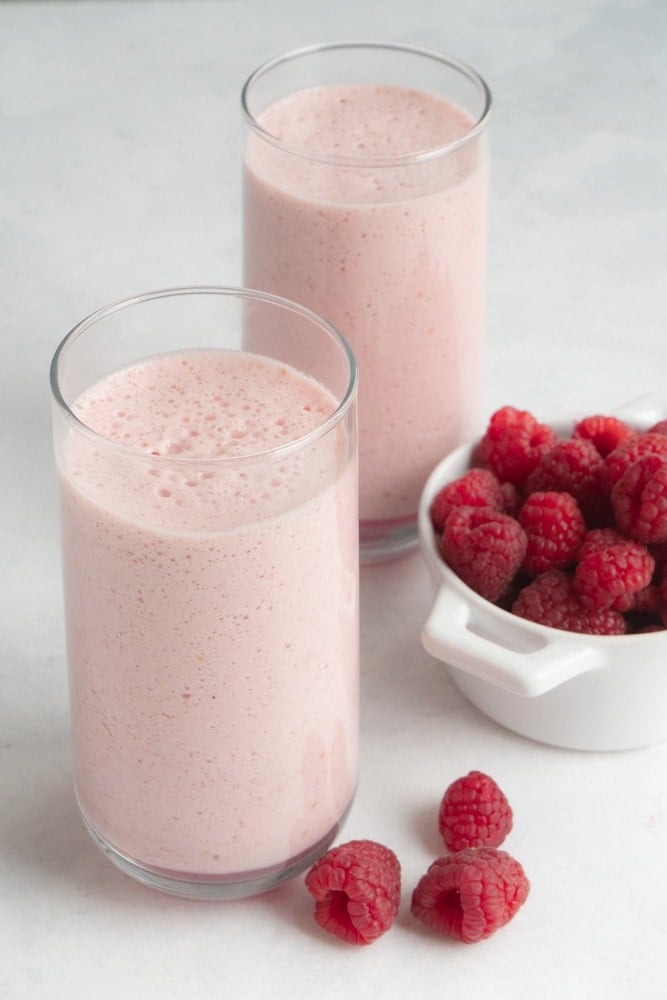 This Raspberry Smoothie recipe is the perfect way to kick off your day. Made with… 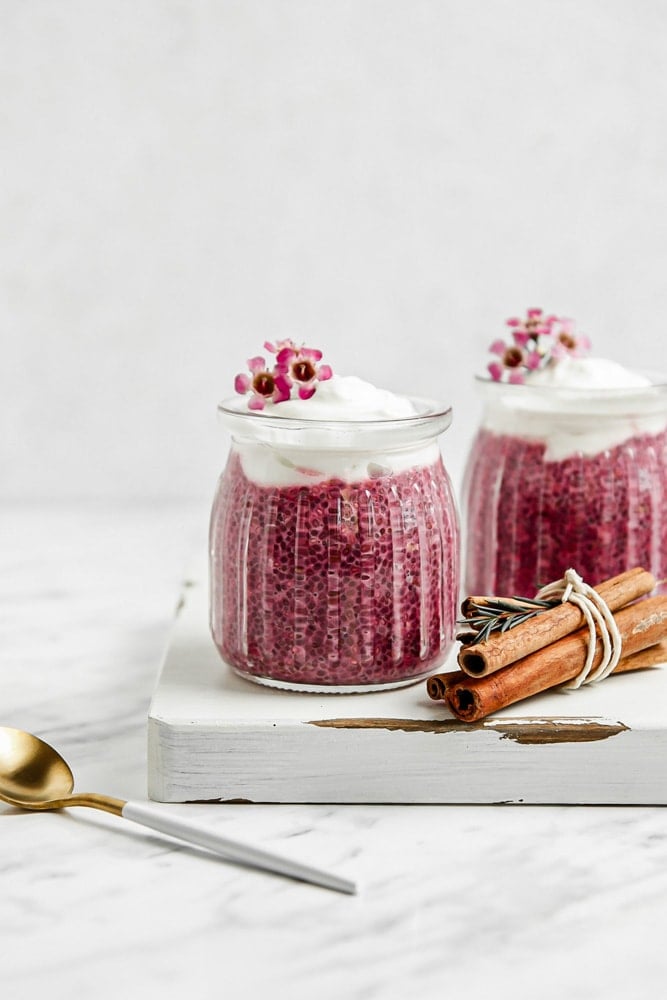 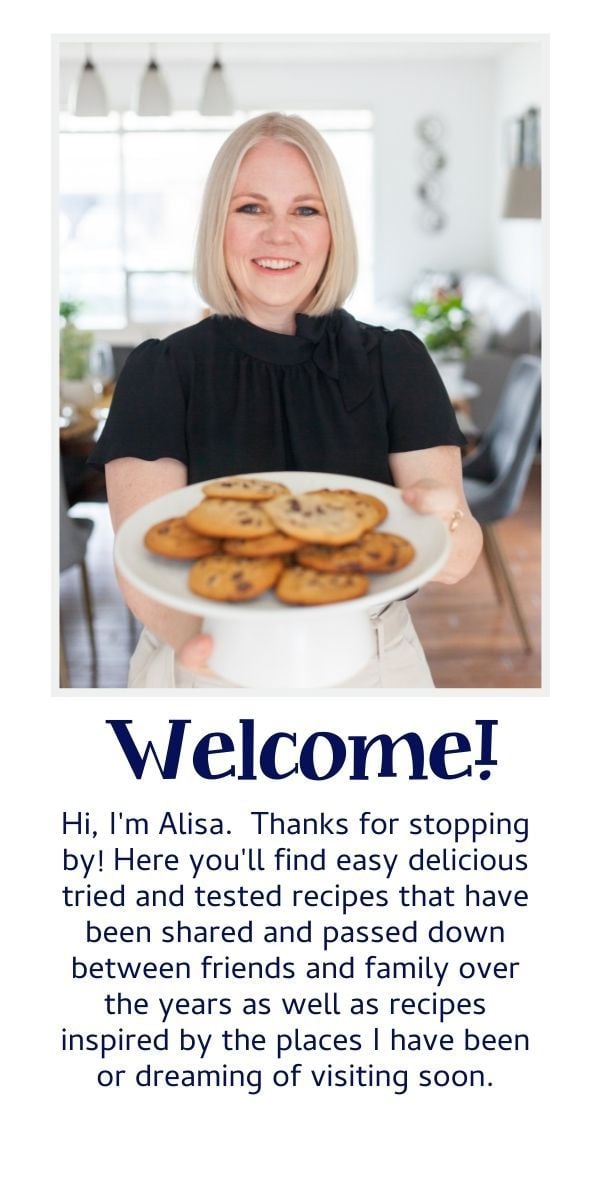